Last week’s results of the Star Ruby challenge were taking quite a while to settle and the longer I found myself sitting with them and thinking about them the harder it was to remain motivated to continue. Which is quite obviously strange, they were very good and valuable experiences. Why then the trepidation? Well, nobody wants to fly too close to the sun do they? Afterall, my HGA pretty much told me I can contact dead loved ones, how exactly is one supposed to handle something like that?

Especially when the only person I can really talk to about it is Tommie, it’s not like I can ring any family member or old schoolmate and say ‘Oi, guess what, my Holy Guardian Angel that talks to me who has taken the form of the Roman goddess of wisdom, war, art, schools, and commerce, she’s taken that form because she knew I’d identify with her as she’s not really an angel she’s my higher form of consciousness, anyway, she’s told me through Tommie’s 40 Servants cards that I can contact the dead, what do you think of that, oh, fancy a pint on Friday night?” Yea, if I said any of that to my family or friends they’d probably be looking to get me carted off and locked up in a rubber room. Am I losing my mind? No, I’m not, I know I’m not. But not even really, really, really crazy people admit they’re crazy.

Silence. It was my boy’s birthday. It was an amazing day and one of the happiest days of my life. No need for anything else to be added to the day.

OK, I’m going to get nowhere doing nothing so man the hell up and do something. I’ve had trouble with the names and the step aerobics elements as spoken about in last week’s post and podcast. So I’ve changed them.

The start remains the same but honestly, the whole Phallus thing is….well, it’s a bit juvenile ain’t it? So, that’s going to have to go too. Maybe next week I’ll revert to a Qabalistic Cross to begin? We’ll see.

Anyway, gone are Eros and Babalon and the rest, in come Anu, Dagda, Ogma and Cernunnos and instead of Crowley’s Tory party Theresa May- and George Osbourne- power poses in come some pretty simple yoga poses.

Anu: The God of All; the mother:

Upward salute: Arms up above shoulders, head looking out, you are welcoming the goddess who made them all. 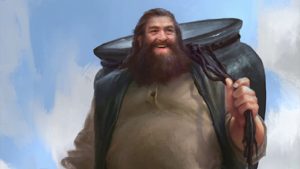 The Dagda: the ‘good god’, he is good at everything, the first druid, the first warrior.

Ogma: A god skilled in speech and poetry, the inventor of the Ogham script, each letter represents a Celtic tree (zodiac sign)

Then the final part:

Before me the Spells (Iunges),

Behind me the Mysteries (Teletarchai),

On my right the Constraints (Sunoches),

On my left the Spirits (Daimonos),

For about me blazes the five-fold Star,

and in the Stone, the Star of Six is fixed.

I meditated for 30 minutes, didn’t invoke. I’m still a bit freaked out from last week. My meditation is a mess and my brain is hard to quieten.

Other banishing things are occurring, not by themselves but it’s high time I’ve done some of the small things. I’ve logged out of my Facebook and Twitter accounts and changed the passwords so that when I do go to the pages automatically, as we all do, I’m gifted with a page that I need the password for. Knowing I’m too lazy to be bothered going through with a whole ‘reset password’ episode I just close the page and move on.

As email newsletters come in I’m taking the 30 seconds to unsub from them. It’s such a lovely thing to not get a hundred emails every day now. And I’ve no idea what’s happening on FB or Twitter. I do miss the landscape and nature photo groups though but not much else.

My version of the Star Ruby fits like a glove, I know these gods/guardians and it fits. I feel like I’m home with them. Phallus though, oh Al, I know you were yanking cranks when you came up with that. 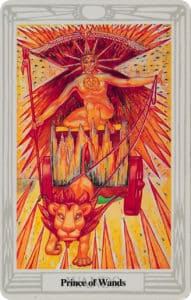 I decide to invoke my HGA as I have some more questions but not yet about the dead thing. Y’see, I’m still a bit scared of the whole HGA thing and I’m afraid to go somewhere I’m going to regret, even though I know I shouldn’t be as she’s a goodie, not some Goetia dickhead. Anyway, I will towards the end of the week, just not yet.

“Honesty and integrity, focus on the common good. A turning point in life. Card implies this is the right time for new energy, new enthusiasm.”

Delightful, I’m very excited to be working with Tommie not only on the podcast but with these posts too and I can only imagine the high jinx we’re going to get up to over the years to come. Bring it on!

So, if you listen to the podcast you’ll know I’ve got plenty of time for Rudolf Steiner, I think his schools employ a smart method of educating young people and his thoughts on spirituality and consciousness are really interesting if a little hard to understand in places. Well, in many places. His farming methods are amazing and he even invented a new school of dance, which isn’t my cup of tea at all but y’know, fair play to him. Here’s the bad bit and yea, I know there’s always a bad bit with these occult people. Steiner believed that Africians were the lowest on the ladder of incarnated human consciousness and then we’re reincarnated as Asians and then white Europeans. I can’t be having that nonsense. It’s the same with disabled people, they’ve ‘paying for something they did in a previous life’. Like, come on man. 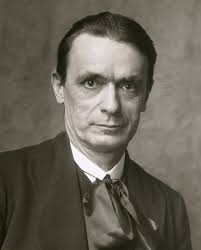 But it’s not all bad, Steiner has three lectures about mythical Hiberia and about druid wisdom and it’s bonkers and a great listen. But it’s probably not true, it was just his imagination while he was in a trance, which doesn’t mean it wasn’t true, it was true for him but it probably wasn’t historically true. But maybe it was. We don’t know as the ancient Irish weren’t bothered with writing about such things. Anyway, you find yourself at the crossroads then, can I go with his good stuff when he was so wrong about other stuff? How trustworthy is his good stuff if he has this huge stain on his record?

I asked my HGA for her thoughts on Steiner, especially as she gave Alan Chapman’s Magia two thumbs up last week. I did a three-card tarot divination and asked:

Any opinions on Rudolf Steiner?

“God’s will in action through humans.”

“The birth of all things from the unchanging, perfect, divine unity. This Ace card implies an opportunity to help us grow professionally and facilitate important developments.”

“This card indicates a moment in your life when you have a breakthrough insight and feel very inspired and motivated about an idea to move forward. It feels like a great opportunity has opened up for you.”

“The urge to understand the true process of all things.”

“This card shows unexpected ideas and inspiring lightning rays that dissipate our previous thinking habits, from which we get many possible solutions.”

Well then, it certainly seems like Minerva has a soft spot for old Rudolf as well, I’m reading into this his thoughts on consciousness and morality anyway. Let’s see where this goes.

We travelled long into the night last night in terrible rain and unfortunately we came across a couple of car accidents. One kept us in traffic for about an hour and there were other hold ups too thanks to the weather. To the best of my knowledge nobody was hurt so being late doesn’t matter then.

I only write this as I’m down the country to help my Father in Law with some renovation work and some work at his rancho, which is Polish for ranch but it sounds Mexican which is only a good thing.

Day 12: Can you pronounce Bieszczady?

The SR gives such a great feeling now, really grounded after doing it and it feels like a space is cleared for something else to happen. I tried again to do some of Peter Kingsley’s Incubation meditation and man, it’s so difficult to get right, but I’ll get there. I reverted to some Fire Practice but with about five minutes to go my FIL came home and I was summoned to the building site.

I got the SR done nice and early, after my writing work but before going to the renovation site. I did it as usual and did a one-card tarot reading asking ‘working with my FIL, any advice?’

I got the Hierophant.

These are the meanings that spoke to me. 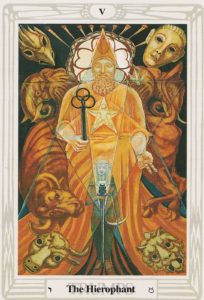 “He searches for hidden meanings and teaches us how to discover higher purposes that we can recognize in everything while striving for materiality.”

Now, the thing is with building work is that my auld lad is a plasterer and I’ve been on building sites since I was about 12/13 years old and being the stroppy teenager that I was I didn’t really learn much, well, that’s not exactly true, I learned how to do loads of things but I didn’t really put much attention on it and I certainly didn’t like the work. Since undertaking a few big renovation jobs of my own over the last few years I’ve finally realised how important all those things were.

With the FIL I feel I have a great opportunity here to learn loads about restoring the 200 year old house we’re working on and to learn more about his horses, not just the riding but the day to day care and duties needed to run a rancho. I’ve also got two weeks down here with nobody who speaks much English so it’ll do a world of good for my Polish. “Completed tasks, higher purposes and real calling” This stuff could well be my True Will! Now, if it would just stop raining for 10 minutes we might have a fight chances of getting something done.

Looking forward to another week ahead.