Why a LBRP Alternative?

One problem that people have when it comes to rituals like the Lesser Banishing Ritual of the Pentagram, is that they really don’t feel comfortable with using God names and imagery from Judeo-Christian sources and are often looking for a good LBRP Alternative.  A lot of people who are drawn to the occult have come from Judeo-Christian backgrounds and feel the need and the want to remove these old associations from their new practice.

This is all well and good, and depending on the paradigm I am following at the time I also have these feelings and hesitations. I recently read Leviticus and was so disgusted by it that I felt it very hard to use any sort of Christian or Jewish imagery or ideas for awhile. If I was doing a Banishing ritual, the last thing I wanted to do was call on that evil Demon, possible Demiurge, Jehovah, for help. If anything I wanted to banish him. Hence, I can see a need for an LBRP Alternative.

One way I got round this was by using the God’s names as if I was commanding him. He was now my bitch and had to do what I told him. Get into that pentagram YHVH, same for you ADONAI! This is OK, but it feels a bit smart arse and less effective. I suggest trying it though, there is an element of fun to it.

To me the best thing about coming from a Chaos perspective is that all doors, paths and rituals are open to me. I don’t have to be bound by any particular domination, idea, book or teaching. If a leprechaun banishing ritual works, than I can use it. If a Norse god can do something I need help with, then I can go to him. So, taking that attitude, if the LBRP works, and it does, then I get to use it and the fact that it uses Judeo-Christian imagery and names shouldn’t stop me from it’s benefits.

I actually do more Invoking than Banishing these days. I think banishing gets too much air time, to be honest. Lots of Occultists are broke, have no friends and have problems where the things they want always stay away. I’m not fully convinced that daily banishing is to blame for this, but if you are banishing more than you are Invoking and you seem to always have nothing, you might want to look at that.

To Change the LBRP from a Banishing Ritual to an Invoking Ritual, just change the way you draw the Pentagrams, and obviously change your mental attention during it. See stuff coming to you rather than pushing stuff away.

But, going back to the people who just can’t get passed the imagery or the names, or those who can get past it but just want something different for a change, I worked out an LBRP Alternative using Roman Gods, imagery and wording.

The Qabalistic Cross section now becomes the Romanistic Cross using the phrase: “From the sky,  be here now,  with thunders and lightning strike, in unrestricted command. Let it be done”.

TIGILLUS, LUCETIUS, PLUVIUS and STATOR, which are different aspects of Jupiter, are the new God names to be used and the Angels now become Mercury, Vulcan, Neptune and Tellus.

This will not be for everyone and will probably be frowned upon by more people than will want to use it. But so be it, I present this only as an idea, not anything to take overly seriously, call blasphemy or whatever. It’s just an idea that might help people. 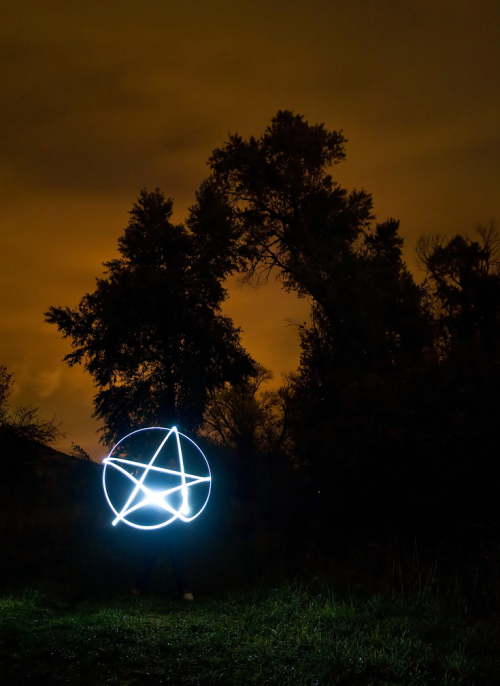 Thanks to NotFancy on reddit for the proper Latin!

Using your hand, a wand or a dagger.

You are making yourself into the centre of the Universe with this section. You should see light extending from your head to the brilliant White light above you. The light should travel down your body and continue down to infinity, likewise with the right and left shoulders. I think this works best with intentional force, pushing the light out with the dagger and moving the blade within the hand to the direction you are opening. But try different ways and see which suits yourself.

This is the end of the first section.