EDIT: THE DECK IS FINISHED AND CAN BE BOUGHT HERE, BUT GOOGLE IS STILL DIRECTING A LOT OF PEOPLE TO THIS PAGE!

As of this morning I am, more or less, half way through completing my new 36 Card Deck. All going to plan will be available before the end of the year (I’m actually hoping sooner, but you know how these things go).

I am describing it as both a Magick and Oracle Deck as the cards will be multi-functional. They will work extremely proficiently as a Divination deck and an Insight or meditation tool, but also they will be geared towards use in Magick Tools as focuses of energies and Other – much in the way Prayer and Altar Cards work, or Devotional Images of Saints, or what have you. Each Card will have a dedicated Sigil too.

I will give further details and explain the Cards much better over the next while here on the site, but fear not as there will be an accompanying booklet included with the deck. Incidentally, the deck isn’t based on the Tarot or any other Oracle deck type, instead it uses images, archetypes, spirits and symbols that I find useful, helpful and potent. So, hopefully what you end up with is a very unique and practical working Magical Oracle Deck.

The Cards will include mostly new artwork but will also included some reworked art that I have done previously. I am really happy with how the cards are coming out and am confident they will look great when printed.

As yet, I have no name for the deck but I am sure that will arrive when the time is right. I may do some sort of preorder type deal to help with the initial costs of printing the deck, ( I am toying with a Special Limited Edition of the deck as a preorder bonus, but nothing set in stone as yet) but to be honest I haven’t really given all that much thought as yet, I just want to concentrate on doing the cards for the minute.

Some sample images are below, but note that this is not final artwork as yet and the Sigils have been removed (they will be located on the centre top of the cards). The blue broken line is the trim line and I am sure you can guess that each card will not be called “TEXT” 🙂 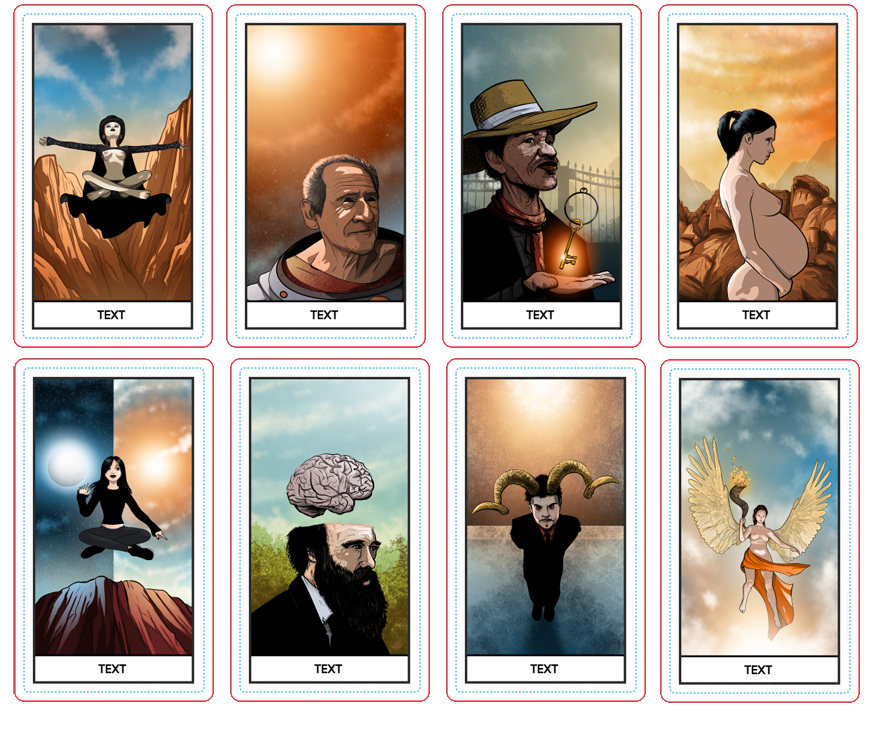