So, good people of the internet here we are again with another edition of OTHER VOICES! This time we have a wonderful reflective piece from Sepherion leFey who wonders what would be the best message to send himself…

I sometimes fantasise about being able to project myself back to a time in my past and appear to myself with news of the future. If I couldn’t manage the full Bill & Ted effect (“How’s it going, younger me?”), then perhaps I could be one of the things I tried to summon, all those years ago; an image in a flame or a ghost in a scry glass.

Clearly, I would immediately try to send through the message “Buy Apple Stock”. Now that I think about it, maybe I do try this in the future? Apples have appeared a lot in my Story. My introduction to Discordia, at an early age, and my earliest Magickal practices involved visualising apples. The symbolism has been strong in my paradigm ever since.

Maybe I need a better message? If I got cute about this, I could pull a “I wish for three more wishes” thing. If I could send back some sort of advice for younger me to use to be better at Magick by the time he becomes older me, then maybe older me will be able to send a better message to younger me, see?

If you roll that idea around in your head a few times, then it won’t be long before I can deliver the 2019 sports almanac and tomorrows winning lottery numbers. Score!

The trick, of course, would be getting the wheel spinning. What sort of epiphany could I reveal to the crazy young lad mucking about in the woods at midnight, desperately trying to spread a line of table salt into a circle over uneven ground in almost pitch darkness, save for a guttering candle flame. I mean, the guy’s an idiot.

For a start, let’s try to narrow the focus. At his age, his head is still full of stories of dragons and djinn, of Magickal swords and rings, of wondrous items of power, and of the words that would command the elements. An early entry in my Book of Shadows suggests that I came to some conclusions I still hold to today. Miyamoto Musashi said it better than I, so let me use his words.

“There is nothing outside of yourself that can ever enable you to get better, stronger, richer, quicker, or smarter. Everything is within. Everything exists.“

I didn’t realise it back then, but I had been secretly hoping for a Great Master to reveal himself to me, or that I would find the right spellbook, or construct a talisman of power, or dig up Excalibur, or whatever. Once I had the shiny, I would have the power. Silly boy.

To realise that our powers come from within is a good start. Regardless of where you think the energy comes from or what intercessors you use, it is the capacities of our mind that does the work.

Go Musashi, I summon YOU. 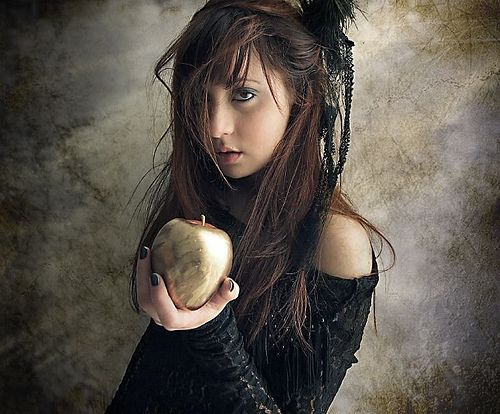 Thinking about it, though, I did start training in martial arts, back then, bouncing around for a decade or so before settling on a school that was named after the Book of Five Rings.

Drat. Useful, but no Golden Apple.

Echoing my search for the right Dojo, was my search for the right model of reality, where my disparate understandings of the universe would fit together like pieces of a jigsaw to form the Truth. I was finding it difficult to believe in Magick, in my own capabilities, when I hadn’t squared what I knew about Science with what I intuited about Magick. I knew that having that belief was the key, not just for working Magick, but for anything new or scary or challenging.

I spent years reading and discussing religion and philosophy with anybody that would put up with it. I put together some interesting models and I am pretty happy with where I have landed, but I am sure I could have progressed a bit quicker if I hadn’t been so obsessed with finding the “Truth”. It’s not that it isn’t important or interesting, it’s more that it doesn’t matter for the task at hand.

I mean, if there -is- a knowable Truth and it was a requirement for Magick, there would only be one type of Magick. It clearly isn’t important. Which means, the model and the method are independent. The model is arbitrary and the methods are many and varied.

Ah ha. “Nothing is True. Everything is Permitted.“ He’ll recognise that. It’s got a nice ring to it and sure tastes delightfully of freedom. 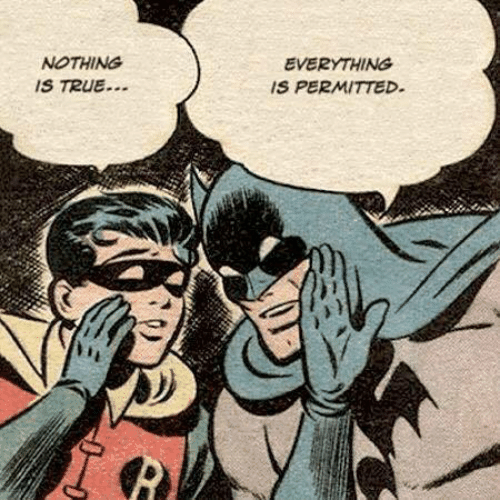 Mind you, if I recall correctly, that last part wasn’t a massive hang up for me in my youth. I have settled down a little bit now, but I did get distracted easily. There were large chunks of time where the mundane world was so consuming that the Magickal world was almost forgotten, like the seventh thing on a to-do list that never quite becomes urgent enough to action.

My greatest obstacle to progression was me. Too often my focus, my attention, was elsewhere. Really, it wasn’t until much later that I discovered the secret sauce for progression, in anything, not just Magick. Shut up and get on with it.

One’s attention focuses one’s reality. You get more of what you focus on.

And some of those slow-burn skills take a lot of time to get any kind of consistency out of. I mean, there are some I am working solidly at today, ones that are relatively new that I still completely suck at. I hack at it and hack at it because I know, now, that that is the only way to get there.

It isn’t just practising the skills, though. It is also about choosing, each day, what kind of world you are going to believe in.

When the candles have been blown out, and the incense merely ash; the circle opened and the toys are put away, One must walk among the world of Men once more. We have work to do and families to attend, groceries to buy and the fruits of life to enjoy. We may have worked our Magick in the circle, but the results are to be found outside of it.

There are a plethora of paradigms seeking our fealty. Each day we get to choose how we view the world, be it one of mundane drudgery or, instead, an exciting adventure looking for fairys among the muggles. The day job and the Daily Mail will try and sell you a story of slavery to a world where no Magick lives. If you let it, it will drag you down to the gutter as surely as siren’s song would lure one to a watery grave. I am not sure which is preferred!

Or you can look for the signs of Magick. The 23’s and the apples, the half-peeled orange, and a blue feather. Look for the symbols in the clouds and listen to songs in the trees. See the Elementals at play and blame your lost socks on Nargles. Cast healing spells at passing ambulances and offer smiles to strangers. Every effect you produce, no matter how small, brings Magick to your world.

In the end, that is the best advice I could confer upon myself. Do more of that.

Now… Where have the Nargles put my wand?

Sepherion leFey is the absurd nom de plume of Eoin Kerrigan. Lightly fold a generous dollop of Hedge Witch into a rich base of Chaos Mage, drizzle with Discordianism and add a twist of Dude. Serve chilled. Warning: May contain Nuts!