So, it is now a few days since I got back from my pilgrimage to Romania to see the relics of Saint Cyprian in Zlatari Church in Bucharest. My “holiday” was extremely stressful – not because anything bad happened or anything close to that, I just felt out of my depth and too far outside my comfort zones to be able to relax and enjoy the experience. Instead, a whole load of shadow stuff got pushed front and centre for me to look at. Meeting Saint Cyprian was going to have a bigger toll on me than I anticipated.

Another reason I found it stressful is that I think I have been trying to do far too much recently, and I was putting way too much pressure on myself to get ALL THE STUFF done. My goal was to get as much “content” for the blog, podcast, Patreon, and Youtube channel as I could, which as I will explain below, meant I ended up not even really being present to the actual experience around me. I ostensibly went on a holiday, but all I could think about was getting videos, podcast, blog posts. I also probably should have turned off all my social media as there was a ton of stuff going on that I probably should have just left at home.

I’m not usually this bad on Holidays, I mean, I have travelled a fair bit in my time. I just put far too much pressure on myself, I think, I just couldn’t relax. Also, there was lots of big stuff leading up to this: the release of The Grimoire of The Forty Servants, the new deck designs, getting a smart phone for the first time in years, setting up Patreon, losing weight, not losing weight, getting a new camera (which is a whole other story), and a million other small little things that all seemed to be building towards something. But towards what?

Maybe it’s because I am forty at the end of the month, I mean that has to be a factor in all this. I feel great about turning forty, well I think I do, how can I really be sure what lurks beneath the surface? All I know is that during my four days in Romania all the things became too much for me to handle. But isn’t that what pilgrimages are meant to be all about? Isn’t what you learn about yourself along the way the most important part of the journey? I believe so. 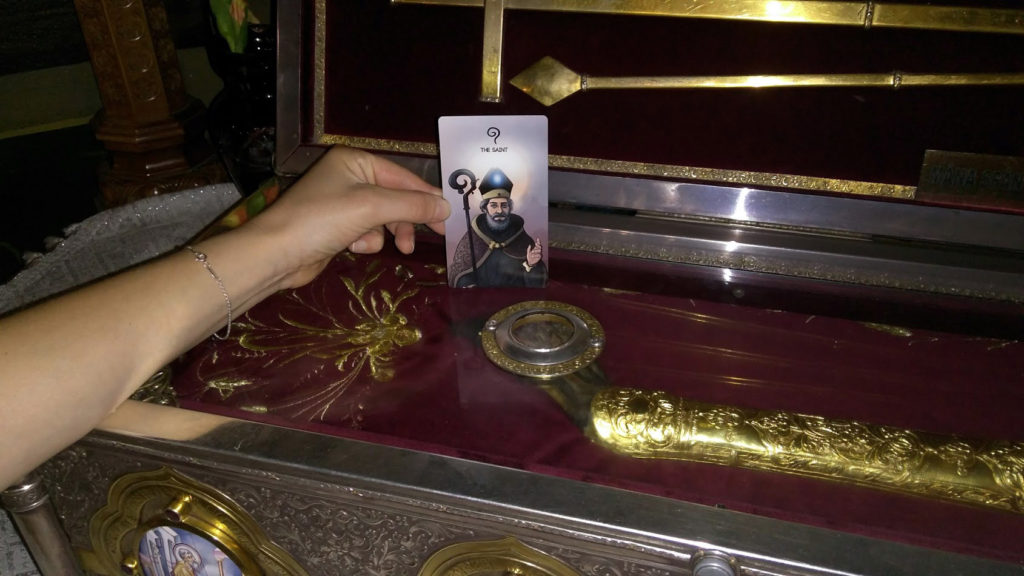 By most accounts Saint Cyprian wasn’t an actual person- its most likely that he is an amalgamation of a number of similar stories. Which of course begs the question: Whose hand is actually in the church? Well, for me it is Cyprian’s hand, and I think that would still be true for me even if it isn’t actually true. It’s as true as it needs to be.

The first time I went to Zlátari Chirch to see the relics, I was too concerned about getting photos, getting videos, getting my goodies (incense, candles and stuff) that when I left the church I realised that I didn’t really remember even being there. I was too concerned with “getting it done” to actually enjoy or even be aware of the scene around me.

In the end I went back to the Church a number of times. It’s quite central and close to the Old Town that it was a very useful spot to order Ubers from, or use as a taxi destination from the Hotel. I did managed to get some nice magick done in the end – I left a written petition for his help and blessing beside his relic (which is his hand BTW) which was great. It felt like a good connection and a mirror to the stuff I do at home.  I also got some holy water, candles, incense, some cloth crosses which I placed on his statue on my altar, I got a new wooden Icon and a number of prayer cards. I also managed to gather some dirt and stones from both the church and the surrounding small gardens which are also now on the altar.

Later on the Friday evening, which was my second trip to the Zlatari Church, I tried to be a bit more present and actually experience the place. I was less hectic mentally, and was a lot more settled than the first trip. There was a number of people there and they were giving offerings of candles stuck in bread. We asked about this later and our driver told us that it was an offering to the dead, but it was also a way of making “Holy Bread” which you would eat first thing in the morning – it was good for your soul. I might try this as an offering too, as I really like the idea. Also, any excise to eat bread, eh?

On this visit to the Church, I also wanted to do something that involved introducing The Saint from The Forty Servants to Saint Cyprian. I took some photos of the card beside the relic and touched them together. It seemed quite fitting and a good thing to do. I posted this image on Facebook and people seemed to get a kick out of it. Which was nice. 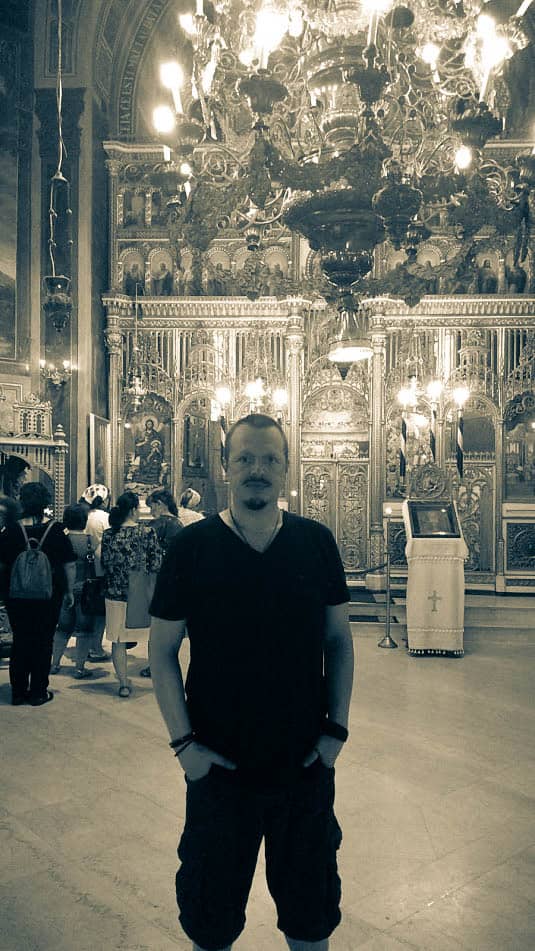 As for the rest of my time in Bucharest, I basically went on a holiday and forgot to actually have a holiday. This was all about unexplored territory for me, and I didn’t do well. I stressed about every little interaction I would need to have – taxis, checking into the Hotel, buying stuff in shops, eating out etc. I was basically spending my entire time and energy rehearsing these scenes in my mind. The uncertainty of the situation overwhelmed me and I just couldn’t handle it. Even when I came home and all was done It still took me a few days to unwind. In fact, even now I am not fully back to myself. Things like this feel somewhat physical in nature to me, so it feels a bit like I have been beaten up and still haven’t, as yet, recovered.

This journey really showed me just how much work I have left to do. I let everything defeat me. I let every small incident become another proof and reinforcement of my world views, such as how deliberately frustrating life seems to be on purpose, or even that old chestnut of the world, the universe and everything is purposely out to annoy me personally.

These are ideas I thought I had gotten past from previous shadow and magick work, but obviously they still have some deep roots within me. My anger, frustration, and lack or ease, all became fully on show and it all seems to stem from the fact that on a deep level I don’t feel confident in myself. I don’t feel as good as anybody else, or as worthy or as important. I feel like an intruder in other people’s world. All the insecurity, all the fear, all the anger because I don’t feel I am as good or worthy as other people. I don’t have the skills or confidence within myself so I externalise it and blame the events or surroundings.

And yet again I noticed myself playing out the victim and the martyr roles that I thought I had left behind. Look how much I am being punished!, look what life is doing to me! I can’t even buy a bottle of wine without the world punishing me! All of this is total bullshit of course, the problem is me, as. fucking. always. 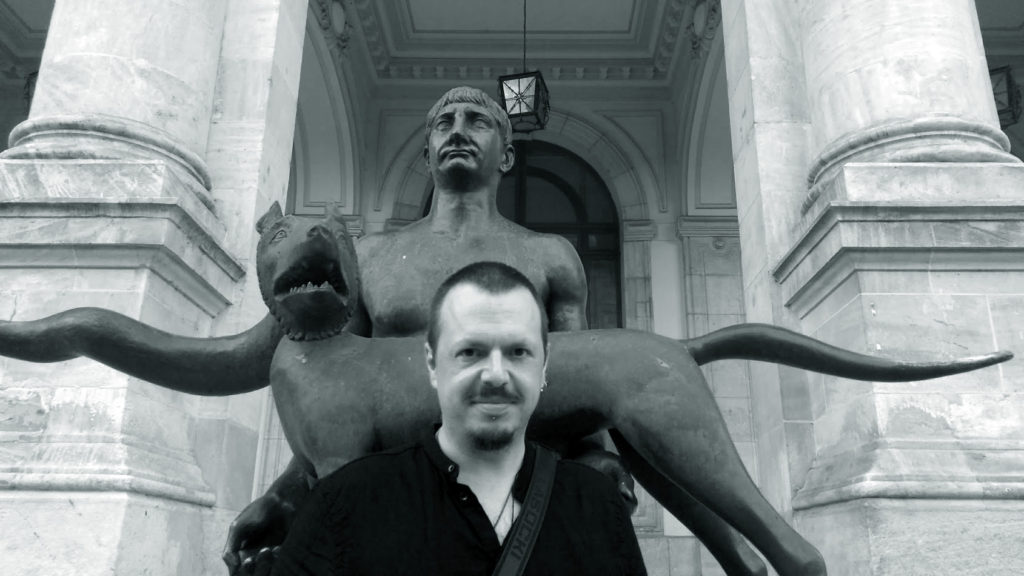 And this trip to see the hand of Saint Cyprian really was a pilgrimage for me, and I really don’t say that likely. I feel this will echo in my life for a long time to come.

The whole experience has thrown up huge amounts of shadow stuff that I now have no choice but to look at. This is what I wanted. I want to be a better person, a more evolved person and the first step in that is seeing how crap you currently are. All these issues that got brought out into the light on this trip will now be the fuel for the next stage of my magick work. It’s hard seeing how useless and powerless you can be, or the games you play, or the poor excuses you use for your lack of ability, but once you see it you can’t go back – you can’t unsee it. I guess you could ignore it and just carry on as if you don’t see your failings, but that’s not what I want to do. I want to evolve past these limitations, stresses and petty worries.

That’s what magick has always been about for me, and in that sense this was an exceptionally powerful magick working. I went to see the Saint and he showed me an awful lot of stuff that I need to deal with. Could you really ask for a better outcome from a pilgrimage? Magick isn’t always pleasant, but no one promised it would be.

(I have talked all about Romania in the latest podcast too, you can hear me rant about it here.)