Let’s continue our look at how I made a Hypersigil Magickal working with my graphic novel THEM.

So, last time, we got up as far as the car accident and the blossoming flower. The next scene (which was originally the opening of Issue Two) starts with Roman in Astral space with spooky stuff happening to him until he appears to walk back through the door to “reality”.

In this reality, we see that the Magick Idea Flower has appeared in the real world, sitting in the window of what we discover is his Hospital bed. As discussed in the last post, the Flower represents the main Magickal idea that I am injecting into the comic. It has gotten closer to Roman, so its effects would be more readily seen. 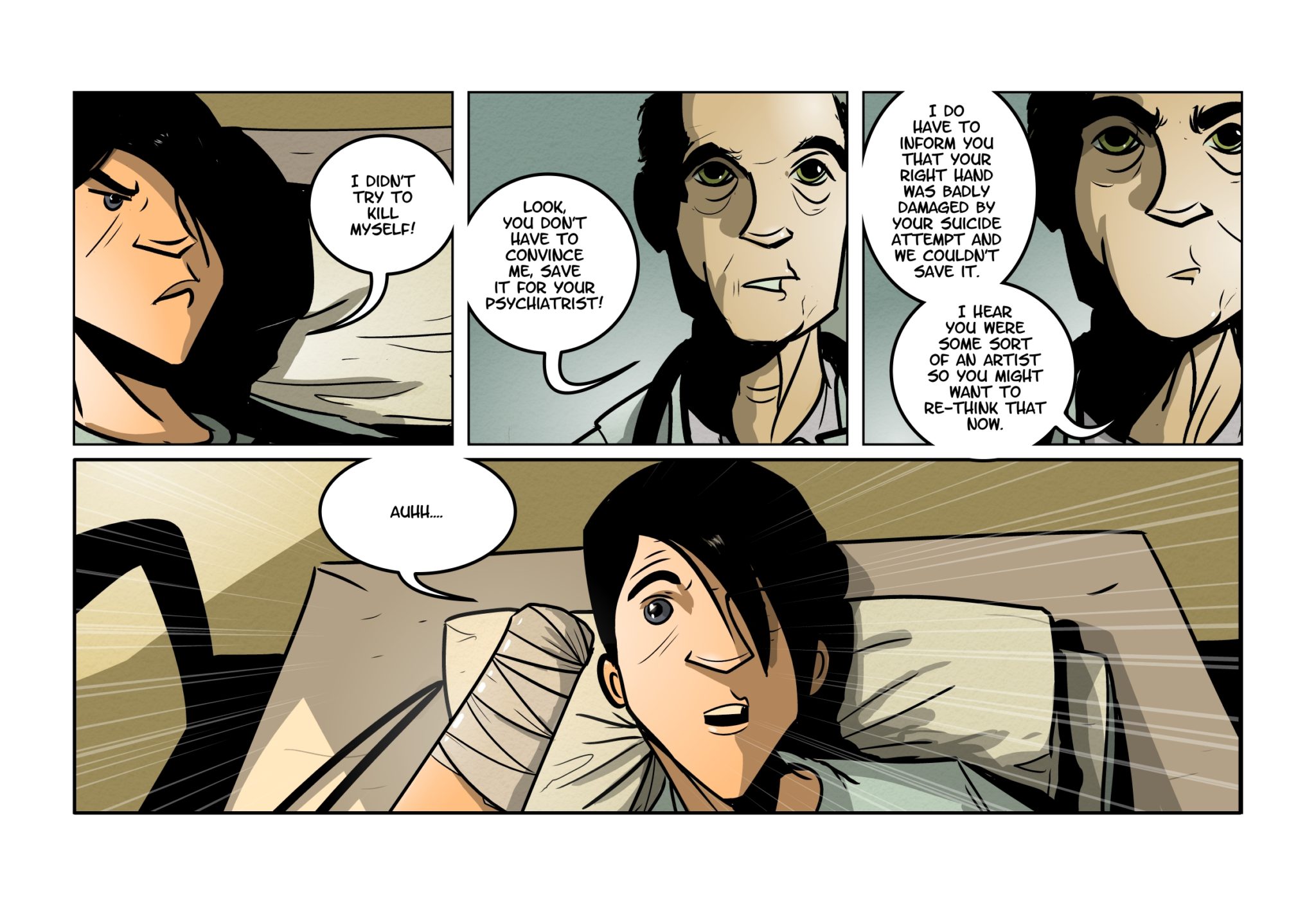 Upon awakening, Roman finds out that he has lost his right hand – his drawing hand. This was my symbol of losing the ability to be able to draw but in my case not because of the physical lose of a limb. The loss I was afraid of , would be if things got so bad financially that I had to go and get a “real job” and give up on my ambitions, dreams and passion.

The loss of my artistic life would have been as shattering for me as it was for Roman and the loss of his hand . Nowadays less so, I don’t feel I cling to that want or ambition as much as I did. At that time though it was the nightmare situation.

The Doctor has no patience for him and suggests that he tried to kill himself, which Roman fiercely denies. This is important as we will see later.

The Doctor, for me, represents all those people in my live who told me to be more practical, to stop dreaming – just get a real job. These are the people who hold tight to their practical view of life where you do things because that’s how they’re done. Life is the way it is, and you just follow the rules like everyone else. The beige people of the world, we all know them.

They, of course, likely come from a place of fear, but it is all too easy to listen and agree with their voices – particularly if things aren’t working out as you hoped or planned. These people have no time for how you (or indeed, even themselves)  feel, or what you want life to be, they only demand that you see life as they see it: a soulless experience that is to be endured, not enjoyed.

We need to jump back a bit…

All I wanted from being a kid to early teenager was to draw comics. When I got to Secondary School, my art teacher really had no time for comics and proceeded to more or less put me off art all together.

He wasn’t a terribly good artist and was a terrible teacher – in fact I don’t think he ever actually taught me or my class mates anything. He would tell you to do work on shading,  for instance,  but never actually showed us the techniques or explained the ideas behind it.

Looking back, I am certain he just probably didn’t know them. We had a substitute teacher for two weeks once and I learned more techniques and ideas in that time than I did for the entire five years of my regular teacher. 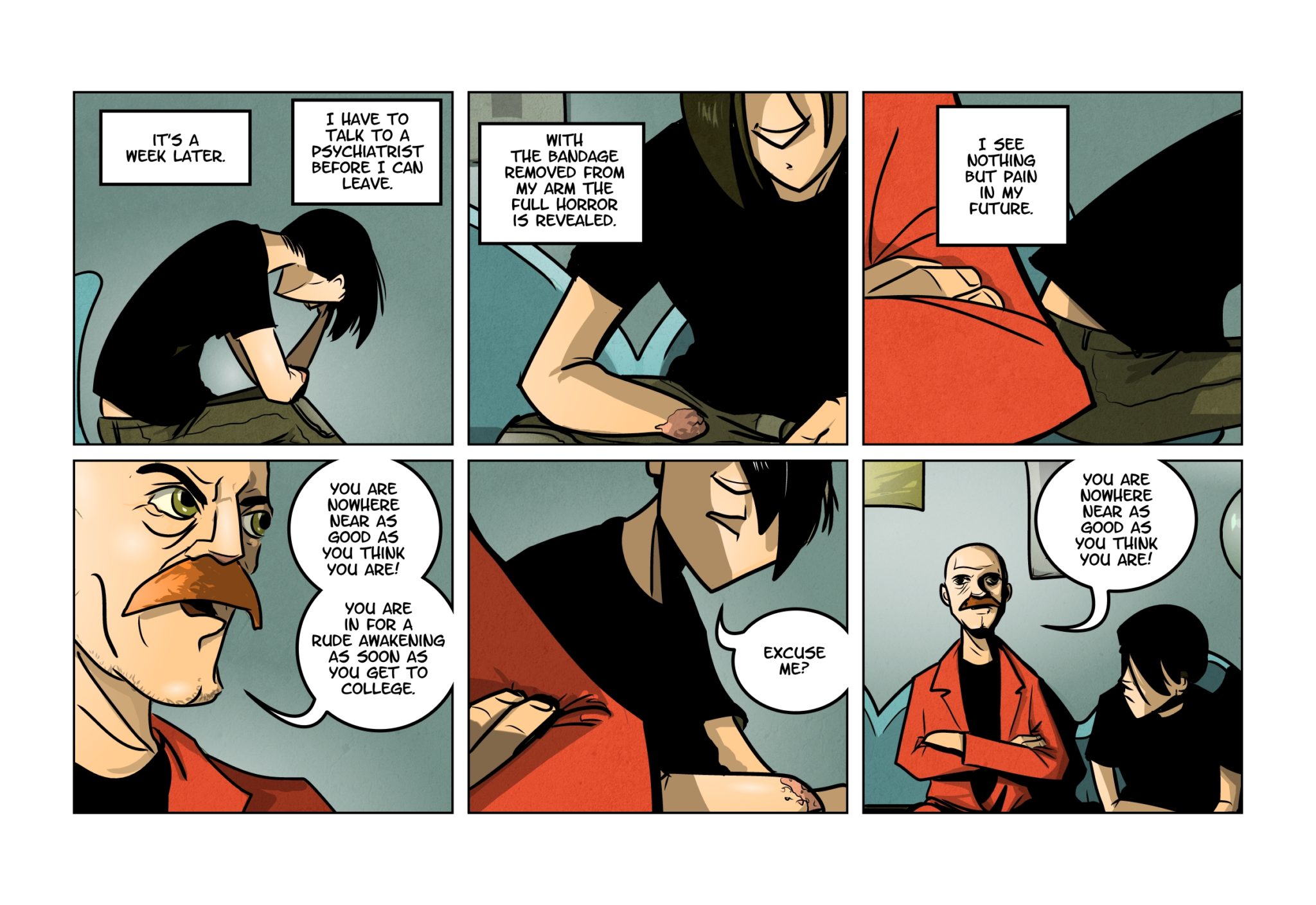 In my final exams, I decided I was just going to do the exam as I wanted and not how my art teacher told us to do it.  I did manage to get the highest mark you can get (so FUCK YOU MR. ART TEACHER! 🙂 ) but by then I hated art and everything about it.

My art teacher kept telling me to get into “graphics” which would be what we would call “design” these days (Frankly it was called Design in those days too). Graphics consisted, from what I could gather from my art teacher, of drawing washing powder packaging and making posters for guitar lessons. The idea of getting into debt going to college, to spend my life designing washing liquid bottles seemed like a nightmare.

I could totally blame my art teacher for killing my art passion at that age, but I won’t. There are more factors involved. I had started to really get into music at that point and my family was falling apart due to my Parents splitting up. I was extremely depressed and had mostly given up on everything, so to blame my Art teacher totally would be too harsh. But get me on the right day…

I came back to comics in my late twenties, having spent 10 years in the Irish music scene as guitar player, singer-songwriter, roadies, sound engineer and recording artist. I obviously had to get the music thing out of my system. 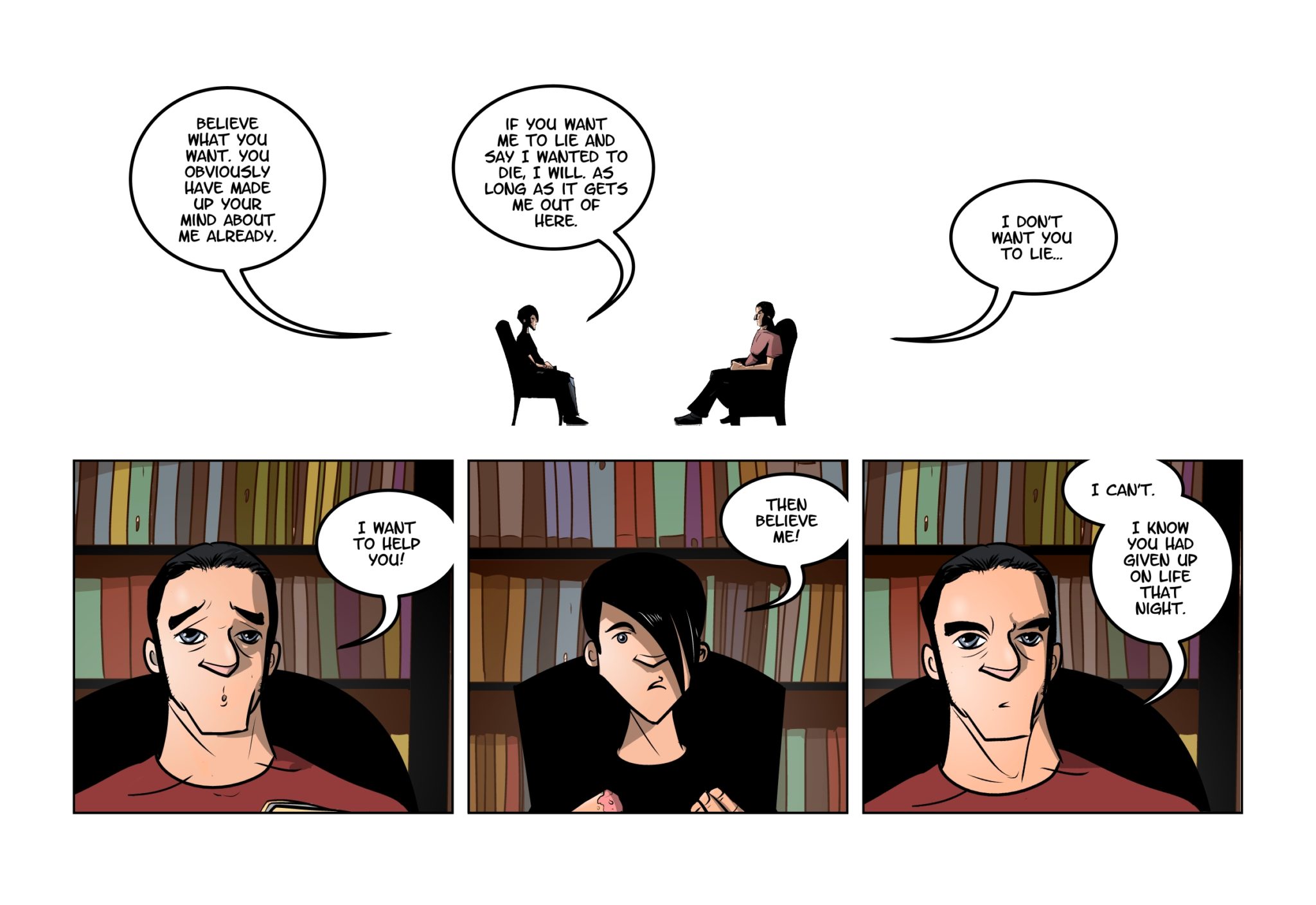 Anyway, enough personal interlude, back to the comic. The next scene, with Dr. Falcon could easily have been the end of the story. It is at this point that the Universe/Fate/Whomever tells Roman that they can help him if he is just starts being honest. Roman says he is being honest and Dr. Falcon shows him the door – meaning Roman is on his own from this point.

There is the idea in Occult thought that if things are going really badly for you it’s because you didn’t take the help or face the challenge when it was small; now you have to face it because there is no way around it. Roman chooses not to go the simple route. I think we have all been guilty of this in our lives, but as I can’t or at least shouldn’t speak for you, let’s just agree that I have been guilty of this in my life.

The THEM of the title are starting to band together and begin to give chase. At this point in my life, things weren’t going great for me. I was letting the voices in too much and they almost did feel physical, as if there were floating heads orbiting my head telling me how shit I was and how much I deserved to be a failure.

It felt like the voices of despair were chasing me, clinging to me like mud or slime. This is hard to explain and I am guessing that unless you have had the experience this is all going to sound weird – just go with me if you can. 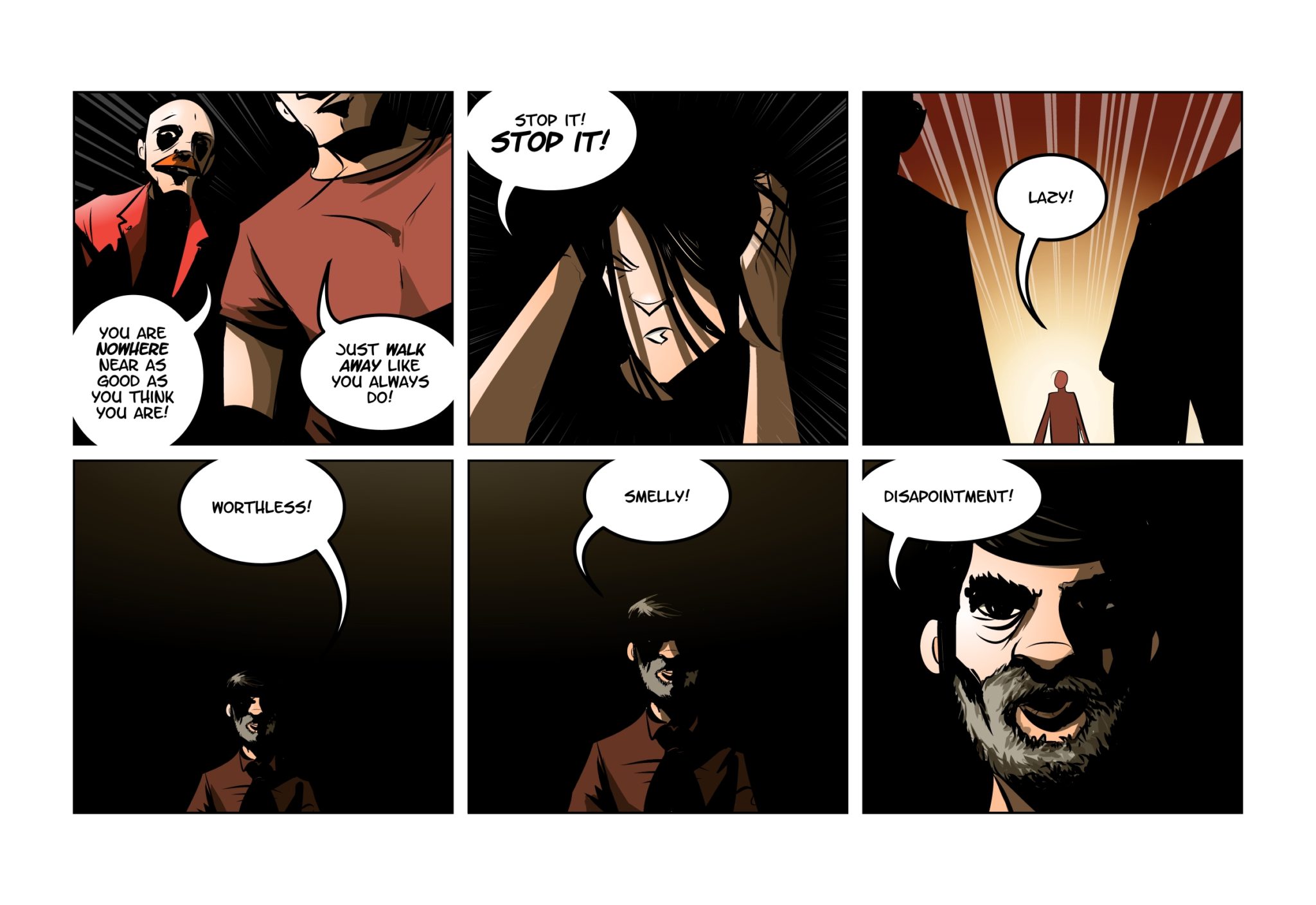 The original Issue Two ends with Roman’s Father making a very physical and over-powering return to his live as a member of THEM. Roman’s battle for sanity is very much now under way.