THEM Hypersigil: Post Script
OR the “Hold on a minute I have been too hasty” update.

Having recently worked on formatting THEM for release on Amazon, the hypersigil element of the book has been on my mind a lot recently. I actually re-read it last night and I have to say that it looks wonderful on my Kindle Fire. You can check it out HERE if you like, if you have Kindle Unlimited you can read it for free.

I have been meaning to write another post about THEM for a long while now as I just had the feeling that the Magick wasn’t quite finished even though I said it had. I ended the previous post in the series with a “At least I tried” sigh of defeat which over the course of the last year or so has proven to be very hasty and false.

The problem with the previous posts is that I was trying to judge the success of the Magick working while still buried deep within the ritual itself. I thought the hypersigil had run it’s course and had fallen flat, but instead I now realise that it was still on-giong.

Turns out it is successful – it is REALLY successful! 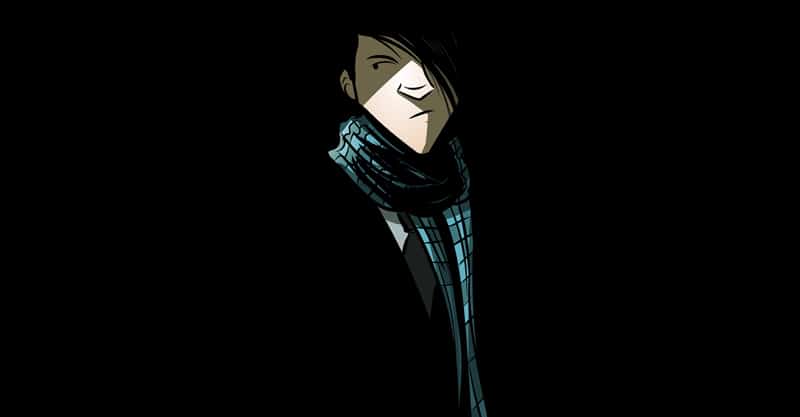 In the book Roman retires from life and works on his art, only to return later with a great piece of work that is more successful than anything he has done previously.

In 2015 I did similar – I deleted all my social media, websites, Patreon and whatnots, and completely pulled back from all the social circles I had been involved with. I had a complete clean out. You can read more about my social media approach and reasons here.

I also gave up writing and drawing my own comics as I just couldn’t see the point of doing them any more. Lots of factors involved in this but mostly it was because I knew that if I put all the effort into doing another one that it would get the exact same reaction as the others. I knew the end result was just more disappointment.

I was stuck creatively because I couldn’t see past the knowledge that doing the same thing over and over but hoping for a different result each time is such a huge trap.

I was also suffering from fatigue and disillusionment from “book them and they will come” syndrome.

Life seemed unfairly hard – against me in particular. I felt I wasn’t getting what I deserved from life and that I was deliberately being oppressed by some outside Saturnine force. I was feeling deeply entitled and was playing an Oscar level performance of the victim role. 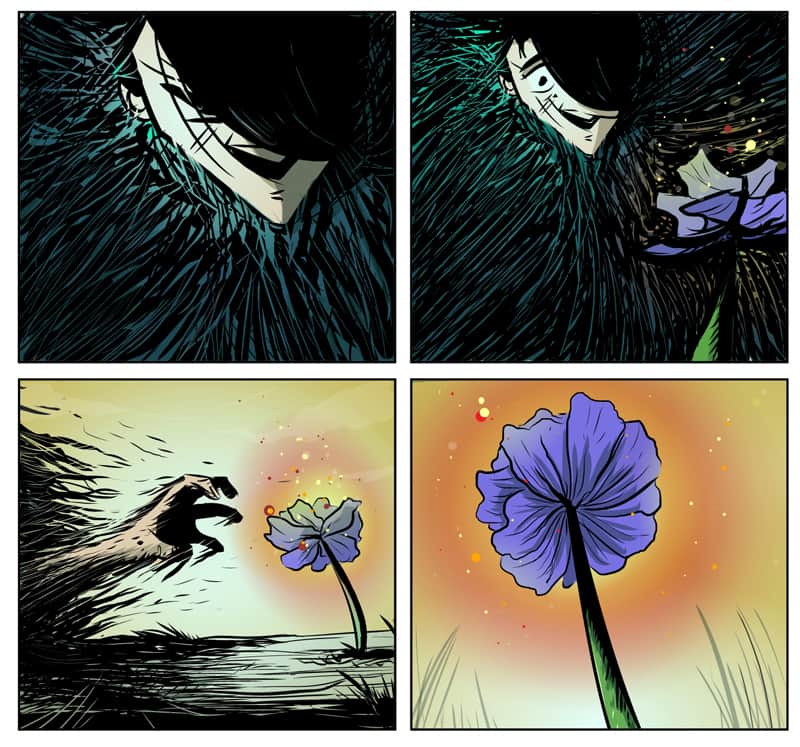 All in all I wasn’t in a good place. I got as low as you can get. Things were bad – like really bad. I was drowning in self-pity, depression, sadness, frustration and anger – Just like Roman in the book. There really was a dark cloud round me at all times.

As you would expect from a hypersigil working, my real life experience directly echoed Roman’s – the whole scene of Roman being engulf by the materialistic tar is EXACTLY how I felt.

Looking back I can see the exact moment that I “picked the flower” just like Roman did. It was my worst and lowest day of my life.

It was also the last day I took anti-depressants* – they were making me feel totally suicidal and zombie like. I felt like a mentally ill patient. I was twitching constantly and even drooling at times.

All my thoughts were about wanting to die – there was nothing else in my head. Just like Roman.

CALLING MY OWN BLUFF

But thankfully, something just snapped inside me and I started getting really angry with these constant dark feelings, emotions and thoughts. I was just totally fed up with the whole thing.

I shouted: “Right you asshole, if you are going to do this then fucking do it and stop talking about it. Let’s do it!”

I took my belt off and put it around my neck and walked up to the door to loop it over the top and try hang myself.

Turns out I didn’t really want to die after all.

I called my own bluff.

I lay down on the couch in my office and just lay there for hours letting everything drop away from me. All my cares, all my worries, all my bullshit.

This was the first time I really stopped resisting life.

And then it all changed. The world seemed to drop. The universe changed. I felt absolutely calm and OK.

From then everything changed.

When I got up I had more resolve than I had in years. I was determined to get happy, to get better to thrive and be well. I wanted to enjoy this life rather than endure it. I wanted to create, I wanted to do things. Iw anted to talk to the world again.

When I returned for my next Doctor’s appointment a few weeks later they told me that unless I was going to take medication there was nothing they could do to help me. I had repeatedly asked for counselling but was told that there was 20,000 people in my are alone on the waiting list.

So, I knew that if I wanted to get better I would have to do it all myself. I bought some audiobooks and courses on CBT  and got into daily mindfulness meditation using Headspace. I also moved away from my previous minor flirtations and delved deeply into Chaos Magick in a big, big way. 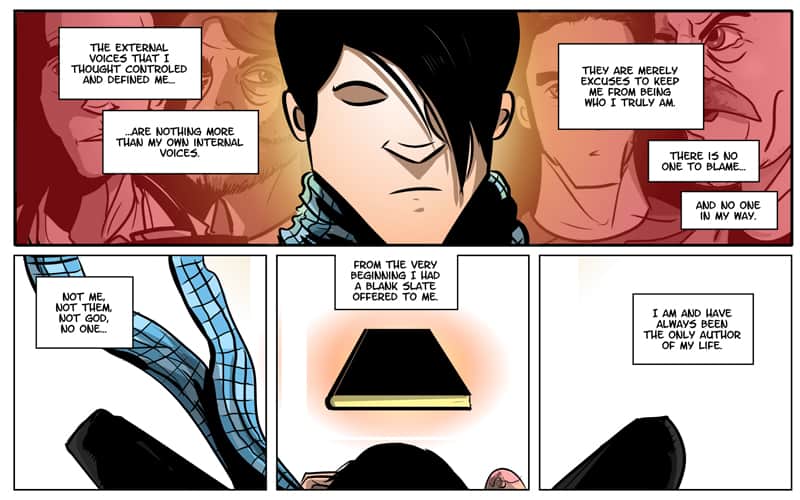 I realised that most of my issues with my life and the world were caused by me telling myself really bad stories about what life is. I decided I wasn’t going to do this any more.

Chaos Magick is so attractive to me because it states that the desired outcome is more important than the truth of the process. The “realness” or “truthfulness” of beliefs are very secondary to their effectiveness in getting you where you want to go.

A belief doesn’t have to be true for you to believe it, as long as it helps you. What is “true” anyway? And why have we put so, so much stress on “truth” to the severe detriment of our emotional and mental health? What good is the “Truth” really?

Besides if we are going to always have some level of cognitive bias why not use it to our benefit – why not tell ourselves a better and more self-empowering class of lie.

If everything we tell ourselves is only a version of a story then why not tell better stories?

So, I did – I started to tell myself better stories. They started out as “not real” but that’s the funny thing about Magick, right? The stories we tell ourselves habitually eventually become the truth. 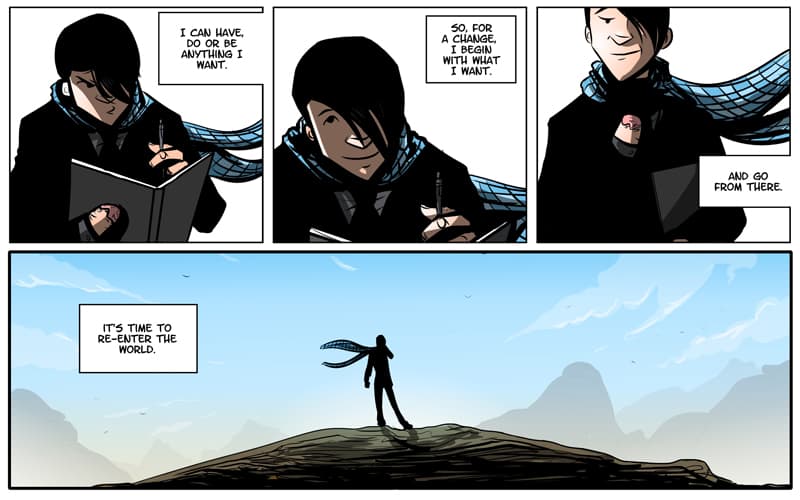 BUT WHAT ABOUT THE SUCCESS?

Well, THEM hasn’t suddenly sold in bucket loads or anything. But I guess I was kinda missing the point by hoping for that.

At the end of THEM Roman is a success and he has achieved some sort of great artistic work, but has this had any sort of echo in my real life?

Well, to a great extend it has. So much has happened since that Call my own bluff moment:

My website and associated social media, newsletters and general media are WAY more popular than any of my art or comic stuff ever was. Like WAY more.

The Forty Servants has sold more than my wildest expectations even though it was only published just a few months ago in the middle of November last year.  I expected no more than 10 people to buy it originally.

The guidebook has been downloaded 1679 times as of writing – which is more than 10 times what any of my comics did. The Gif version of the deck has been shared well over 50,000 times on Facebook that I know of.

I have also gotten out of all personal debt other than my mortgage** . I went from deeply in debt to having decent savings.

I was asked to be Admin of CMG, which turned out to be one of the most rewarding and challenging experience of my life.

Since the New Year I have also been working hard on health and fitness and have lost a lot of weight. I am currently on day 67 of a daily Yoga practice. Weight and self image has been a huge problem area of my life that I now am getting under control. You can read more about it here if you want.

I still have a tremendous amount of work to do on myself to get to where I want to be, but I know it can be done. I feel in more control of my life and I definitely have more sovereignty than I used to.

My life is not perfect by any means but these days when problems come up there aren’t devastating as they used to be. For the most part the panic and anxiety is gone.

Overall things are good -really good! I am motivated and happy to be alive***.

I don’t think the THEM Hypersigil is completely done with me yet. I still think there is more juice left in this working, but I do think the dark bits have past. Anything left is the good and positive effects. Which is great!

I think it is extremely important for me to acknowledge THEM as the catalysis my big experiences in the last few years as it is for all of us when we notice Magick’s hand in our lives.  As Anton LaVey said:

So, thanks Roman for the Magick – I acknowledge and appreciated it.

*I stopped with the anti-depressants and quickly switched to 5HTP instead, which I have taken since. It works for me – even if it is placebo it absolutely doesn’t matter, I am getting the effect I want. Everyone is going to be different though, so I’m only telling you what I did – your mileage may vary and anti-depressants may be the greatest thing in the world to you. So do your own thing.

**For those who scoff at having a mortgage I will point out that my monthly payments are now already lower than the rent in my area having just had my mortgage 7 years.

***It’s funny, as I type that I realise that I never thought I would be able to write a sentence like that and mean it.