‘There’s no such thing as monster’ we’re all guilty of saying it to our children, aren’t we? The vast majority of us are anyway. But what if they are real? If we take it that monsters are imagined then actually they are real, because what is imagined is entirely real. We don’t have to get all Carl Jung here for the sake of this article but while something may not be tangibly real if it exists in the mind, and the mind most certainly exists, then it is certainly real.

As well, brushing off the legitimate fears of a child just because you think that something is imagined isn’t all that helpful to the situation. The poor child is going to feel powerless, he’s already coming to you for help and he might have had this problem for a few days or weeks even and when he finally gets up the courage to tell you, you just dismiss it. How’s he going to ask for help from adults in the future if this is happening already?

We can put it down to an overactive imagination or eating too much of a certain food, I’m looking at you cheddar cheese, but just blaming a source for a problem isn’t going to be enough of a solution. That’s the job of politicians. Well, that’s what has become the job of politicians, but enough of disillusionment with politics, back to the serious problem at hand. 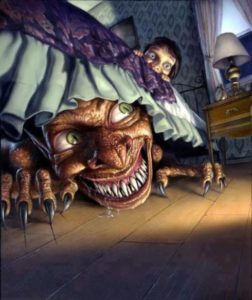 Our eldest is five, and a half, that half is incredibly important, and we knew this day was coming. A few years back, god knows how, I was reading something about how to cure these ‘monsters under the bed’ type of things. One that I liked the most was coming up with a concoction along with the afflicted child and using it together to banish said demons. You get one of those water-spray bottles, you know the ones with the triggers on them, I bet you have loads of polish sprays or such things stored with the rest of your cleaning products. Well, clean one out and get busy making a monster destroying potion.

You can do it yourself but making a ‘ritual’ out of it with the child, this is supposed to be the best way as it gives the child a sense of doing something about the problem and that he has some sense of control or power over the problem at hand. Slice an onion and some garlic and boil them in some water and when it’s cool pour it into the spray bottle and hey presto, you’ve got a home-made monster-repellent. A really smelly one too. All monsters hate garlic.That’s just a fact. Although, you could wimp out and go with pine-infused oil but the choice then is between having your kid’s bedroom smelling like pine-y urinal cakes or a French kitchen. I’m going with French kitchen thank you very much. When getting the kid ready for bed then he can spray it under the bed to keep those horrible monsters away.

But, can we make it a little more fun? You might be aware that a few months back we did a Star Ruby challenge here at Adventures in Woo Woo, the community on Discord was involved and it was great to see people getting results from performing a banishing ritual for a while. Most reported better meditation sessions and much more besides. But, as per usual, I couldn’t stick to the script but I took the main elements and came up with a kind of Celtic Ruby, inspired by recruiting some of the Celtic gods to help out. The other night, wee Murf said he had some monsters in the room again and the decision was made that maybe he’s old enough to try out a banishing ritual.

Obviously there’s no need to go all Golden Dawn or Aleister Crowley on this and be tracing out imaginary pentagrams and learning old Greek words or having Egyptian deities showing up. These are kids after all but giving them a sense of power over what they perceive as real is going to go a long way towards helping them overcome the dreaded fear that something unwanted is concealed in the shadows under their bed or lurking in the wardrobe biding its time for the perfect moment to pounce. Watching Monsters Inc. would probably help an older child but it’s not really appropriate for a five year old.

Getting Rid of Monsters Under the Bed

‘Right then wee Murf, you’re old enough now to show these monsters who’s the boss. This is your room after all and only people or things that you allow into your room are allowed to stay. Let’s do some magic to keep these monsters away.’

We stood in the centre of the room and I told him to say, loudly, but not too loudly for fear he’d wake the younger Murf in the next room ‘Monsters, go away!’ He repeats. ‘Now, face towards the window and say it again and after you say it, pretend to smack a monster’s face.’ He obliged, although a little warily. 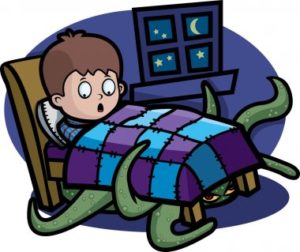 I tell him to turn clockwise and face the wall, say it again and this time do an Austin Powers-style ‘karate chop’ to one of its shoulders. ‘Karate chop. Haha!’ He says as he delivers the critical blow into the air in front of him. I instruct him to turn clockwise again and say it one more time, but this time with two fists push the monster in the chest. ‘Monsters, go away!’ and he pushes into the air with all his five-year-old might.

‘There’s one more to go, clockwise one last time and when you say it this time you kick that nasty monster right between the legs where it’ll really hurt him.’ ‘Monster, go away!’ he says as he swings wildly with his left peg, a kick Diego Maradona would have been proud of, no doubt leveling the monster incapacitated and wincing in god-awful pain on the floor.

‘So then, what do you think Murf, is the monster gone?’

‘Yea Tata, I think he’s gone, we scared him away.’

For good measure, I offer to spray the room with the smelly garlic and onion potion but he says we’ve done enough but he suggests that we do it again tomorrow night.