The Forty Servants Deck- STANDARD EDITION or DELUXE EDITION or DIGITAL EDITION
BUY THE GRIMOIRE OF THE FORTY SERVANTS ON AMAZON!

This Servant shows us how to use our intuition and inner guidance system.
She encourages us to always go with our gut instincts. 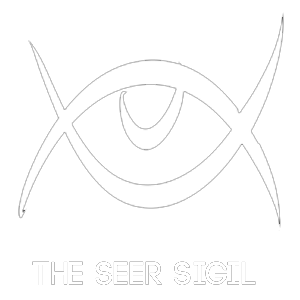 When The Seer appears it is a sign for you to trust your gut and follow your instinct rather than try to work out the problem at hand using analytical methods. You should feel rather than think your way to the solution.

If a big decision is to be made, The Seer suggests that you should go with what feels best rather than what may be logically best. A job with less money and fewer future prospects might be a better fit for you long-term than a high paid job with prospects for advancement, for instance. You know in your heart what the right decision is and it is often the opposite of what appears to be the best decision. If you have to make a choice between two directions in life and you want to really know what your gut decision is then just toss a coin in the air to decide. However, while the coin is in the air take notice of which side you want the coin to land on. That is the direction you actually want to go in and The Seer is telling you to follow it. The actual side the coin lands on is irrelevant.

The Seer suggests that you should feel your way through life for a while rather than trying to mentally work out the best move available or rigidly planning.

The Seer is also about going with the flow and seeing what happens. Letting life lead you for a time, rather than pushing against it and trying to mold it into your vision. The Seer suggests that you sit back from the driving seat and see where the natural currents and tides of your life bring you.

The Seer can be used to increase your intuition, sensitivities, or emotional guidance system. Invoking The Seer can aid you in becoming more in touch with the energies around you, and give you a better feel of the surrounding events/people/problems from an intuitive level rather than an intellectual one.

The Seer is a wonderful Servant to use when you feel you are over-thinking decisions or problems. Candle offerings in return for help with getting in touch with the inner-knowing power can be extremely beneficial.

Invoke The Seer during any time that you need to feel rather than think your way through something.

For more information on THE SEER including its
Prayer, Mantra and Keywords see The Grimoire Of The Forty Servants
BUY AN A5 ALTAR CARD ART PRINT OF THE SEER HERE!